Research, experience design by IxD California College of the Arts
Research
Integrated Qualitative and Quantitative Methods
Objectives
1) Discover how Americans across the country think and feel about sharing their personal data through the advancing digital technology.
‍
2) Present the data as findings, and not insights derived by the researcher, with the intent to leave space for the audience to formulate their own opinion.
‍
3) Design an experience that makes the collected data and stories immersive to the audience rather than require analysis. [see Experience section]
Methodology
A mixed-method approach of pairing survey research with phone/video interviews was used to thoroughly explore the topic and do its complexity justice. A representative sample of 1,010 Americans with 25 phone/video 30-min follow-up interviews.
Interview Selections
The 25 interviewees are spread across the 3 dimensional space and clusters. Of the 25 interviews with respondents audio clips are selected that emphasize the individual narratives. The audio clips are subsequently embedded in the quantitative data to support cross-validation by the research team and eventually the audience, when visiting the augemented reality experience.
Data Dimensions
Survey data was used to develop composite measures of trust in the entities harvesting the data, fairness of the value exchange of data for service and the inclination of respondents of caring about the exchange. The measures were developed using principal components analysis. 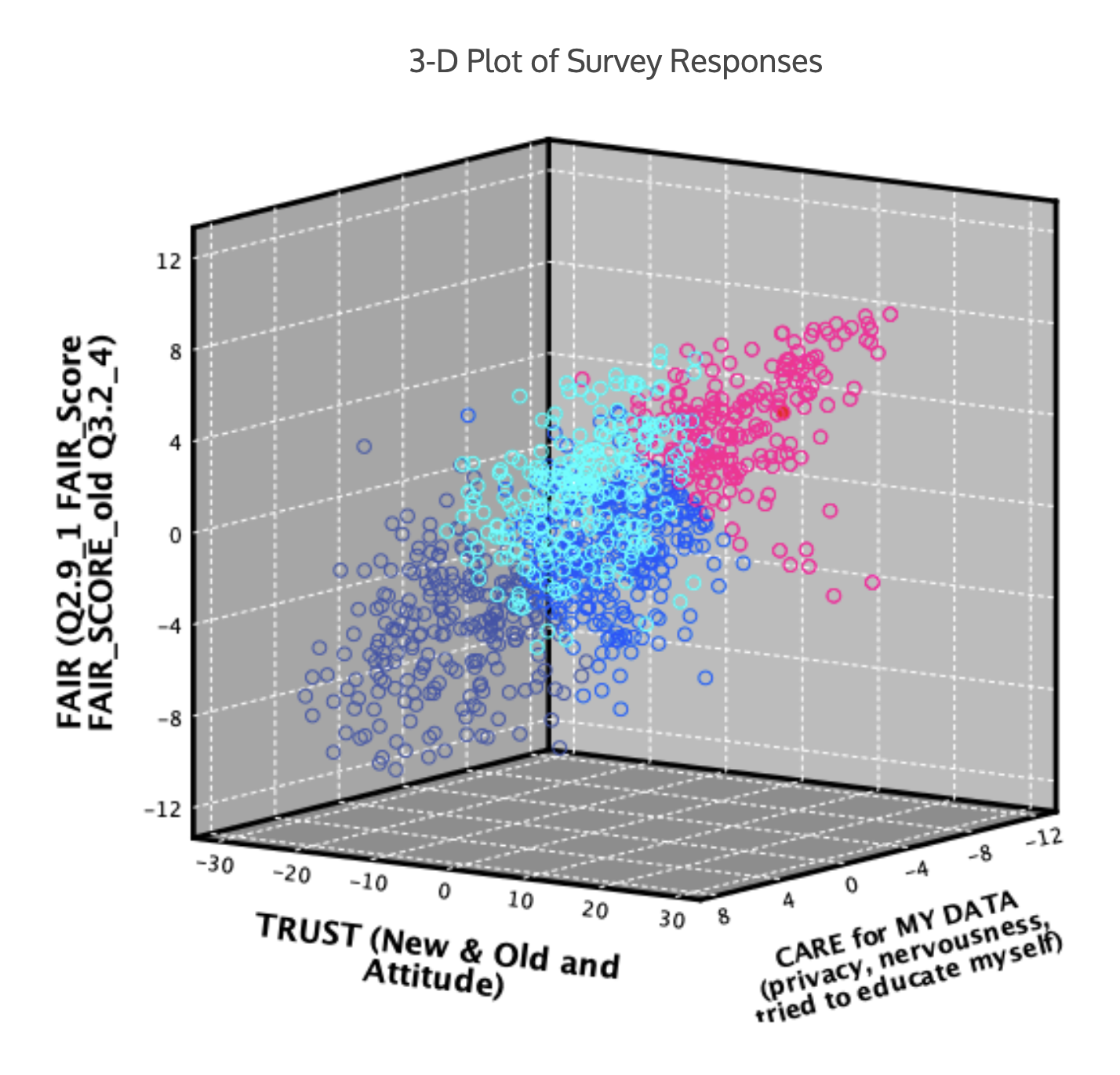 Using the Two-step clustering algorithm the 3 dimensions result in 4 distinct clusters that are described as follows:

20.3% Digital Tech Positives, who are interested in the latest technology, trusting and least worried about data privacy.

31.2% Digital Tech Acceptors, who are participants without strongly expressed initiative to stay informed or being overly worried about data privacy.

25% Digital Tech Ambivalent, who are embracing new technology but are nervous and staying informed about the use and abuse of their data.

23.5% Digital Tech Negatives, who are distrustful and highly worried about the use of their personal data.
Selected Findings
from the Quantitative
Selected Findings 1
Data revealed that 89.6% of Americans believe the innovation in digital technology will make their lives better in the future. Highlighting the systemic-cultural challenge of trading off those perceived benefits to the drawbacks of losing agency over their data.

Selected Findings 2
When asked about trusting an entity with their data across a wide range of types of services and organizations. What is very apparent that the government has a trust deficit. New Tech has a great trust benefit amongst users, even though it is amongst the heaviest user of personal data. Only Facebook and its affiliate Instagram appear to have taken a hard hit from the negative news cycle of the last few years.

Selected Findings 3
When respondents were introduced to a variety of concepts related to their data a few interesting facts surfaced. 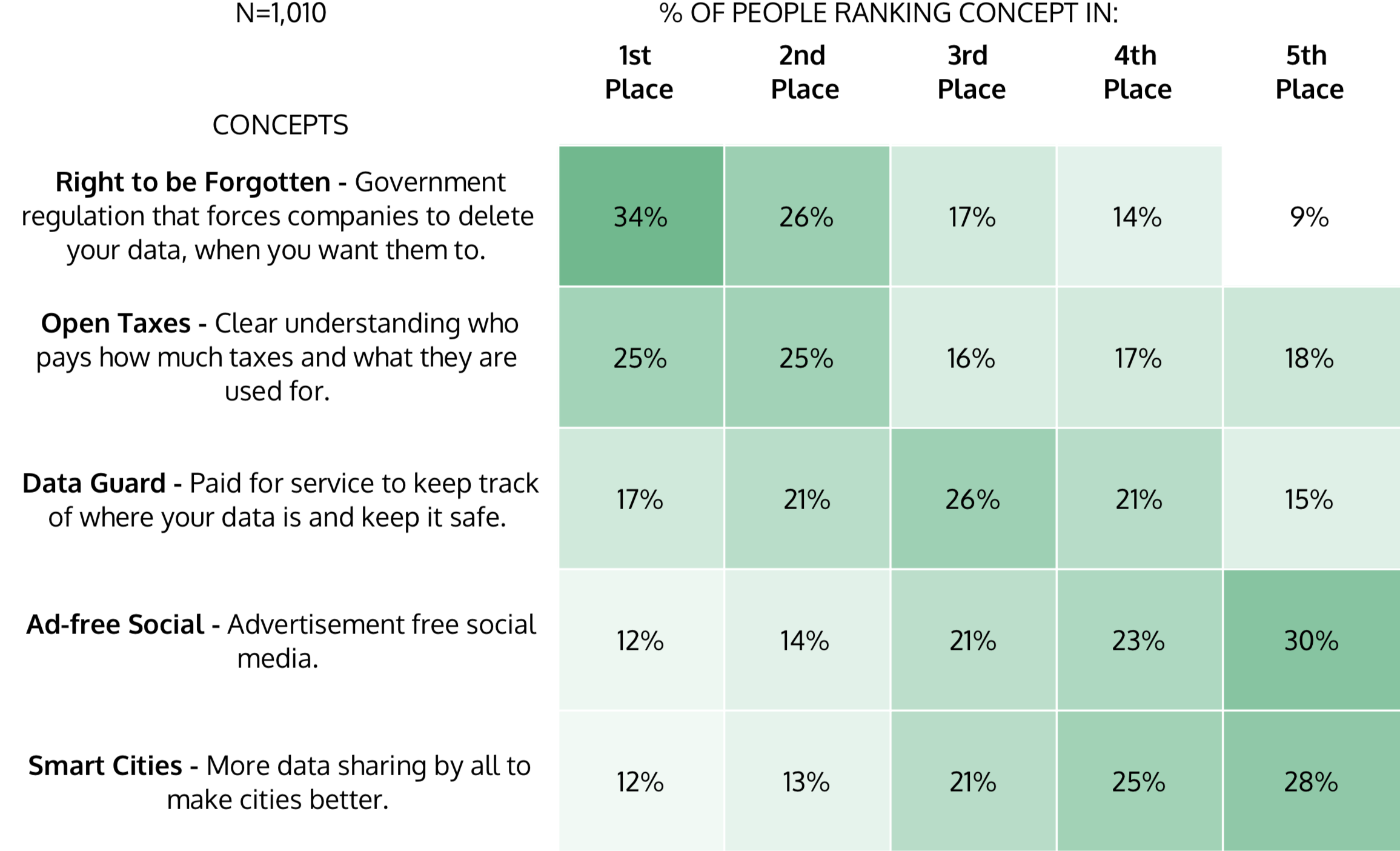 Proposing a paid for ad-free social media offering received a resounding "No" from a clear majority of 78.8% respondents, while only 18.2% were open to it. The remaining 3% had other thoughts.

The Data Guard Concept, that promises to keep your data safe, received muted response. 15% were clearly open to pay, 18% claimed they did not "care enough about their personal data". A majority of 63% remained undecided.

Both concepts appear to implies that the willingness or ability to pay for digital services to keep in control of personal data is below 20% of all Americans.

The idea of making cities smarter through use of data did not fare well, due to the concern about surveillance. 55% opted out, while 40% were in support.

The Open taxes concept, which proposes transparency of how much taxes everyone pays and what they are used for, was widely popular. 35% liked it because they wanted to know that even "the rich" pay their fair share. Another 37% liked the idea of holding the government accountable for how it spends their money. The remaining 27.5% disagreed with the concept all together.

The most popular concept - Right to be Forgotten, which requires companies to delete all personal data, when desired - comes with a universal majority of 65%, who want the government to regulate. 32% disagreed because of the ensuing bureaucracy.